If you are lucky sometimes an opportunity presents itself that allows you to combine several topics at the same time.  Such it is with this post.  I hope you enjoy it as it is setting the stage for things to come.

Onggi has an unbroken history in Korea from prehistoric times to the present.  Paintings depicting onggi and onggi potters have been created throughout the centuries.  Once photography was developed many photographs of onggi potters were also taken.  Today it is not difficult to find digital movies of onggi production on YouTube.
But it is extremely rare to find a movie of onggi that was filmed prior to August 15, 1945 the end of Japanese occupation of Korea, or even July 27th 1953 the signing of the cease-fire ending the Korean War.
1895 was a terrible year for Korea.  There was rebellion in the streets, rampant typhoid fever, a war (the First Sino Japanese War Aug 1894 - April 1895) was being fought over the control of Korea, followed by horrific Japanese imperialism that culminated with the assassination of Queen Min (Oct. 8, 1895) who had been friendly with China. and most likely my grandfather's assassination a few years later as well.  This was one of the darkest periods in Korean history.  One book reviewer wrote, “The atrocities committed to Koreans during this period are only comparable to the Holocaust by Nazi Germany during the Second World War.”
Various attempts at systematic cultural genocide made life in Korea under Japanese occupation extremely difficult.
Realizing that much of Korea’s rich culture might be lost, a group of German Catholic missionaries in the mid 1920’s set out to film aspects of Korean culture for posterity.
Because of our work promoting Korean arts and culture my wife and I were given a copy of that film. with the understanding that we share it.  It has found its way even into Korean public television from those we shared it with.  Now we are getting ready to bring some of it to you.
Be advised that in reality none of the film captures in a substantial way the full depth of the aspect of Korean culture being filmed.  Non-the-less each segment is enlightening and under the conditions of the time it is amazing that a single minute of any aspect of Korean culture from that time exists in this form.   While these snippets of culture may not show a complete picture, much can still be learned if we look carefully at what was filmed. 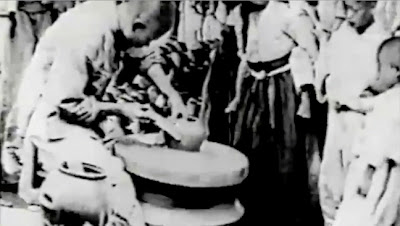 To begin to look at this film I want to try to set the stage.  It was taken either at a festival, at a street fair or simply of a potter trying to sell his ware by demonstrating to the crowd.  It was not filmed in the potter’s studio.  The wheel is sitting on the ground not in a pit as was and is standard onggi practice.  The practice of setting the onggi wheel or dok mulay  (also mulrae) in a pit in the ground allows the potter to stand at wheel head level when forming large jars.  The wheel in this position may also account for the size of the jar being formed, although I have witnessed very large jars being formed on onggi wheels sitting on the ground at contemporary festivals.

Forming The Bottom:
This old film begins part way through the forming process.  This provides me with the opportunity to both bring you up to that point in the film and also introduce you to the methods used to form an onggi bottom.  There are basically two similar methods for forming the bottom for an onggi pot.  Both bottoms begin in the same way.
I’ve searched my image archives but didn’t have the best images to illustrate the very beginning of forming an onggi bottom so I asked my friend Adam Field if I could screen capture some images off his video of Kim Young Ho from Adam’s YouTube posting.  Thanks Adam for granting that permission.

There are primarily two different methods for attaching the bottom of the pot to the wheel head.   In both cases they used powdered volcanic ash (pumice) to prevent the clay from sticking to the wheel head.  Today they use many different powders for this.  I have been told that pumice was historically used.  The pumice is sprinkled on the wheel head and spread to create a ‘disk’ of powder.  These illustrations are for a larger jar so the bottom in this case is quite large.

A ball of clay is placed on top of the powder and beaten into a disk.

The repeated beating of the bottom acts to compress it and smooth it.  Notice that the clay is spread beyond the disk of powder.  What happens next separates the two different onggi bottom forming methods.  The first method is used when making single smaller vessels and large forms.  The second method is used most often when making a number of smaller vessels of the same size and type.

When the onggi potter is making just one individual pot or the bottom for large jars  [1] is used.  When they are making a number of smaller vessels of the same size and style method [2] is used.  What is the difference?
1:  The outer edge of the bottom is secured to the wheel head.  When the pot is finished, the bottom edge of the pot and bottom edge are trimmed cutting off the securing edge.  Since powder is preventing the rest of the bottom from sticking, the pot is easily lifted off without cutting the bottom off with a wire.
2:  I know they look similar since the outer edge is also secured on the wheel head in [2].  But in this case a kal or knife is used to cut a circle of clay forming a securing ring of clay around the actual bottom of the pot.  That ring of clay is stuck to the wheel head and stays in place.  Each new pot is lifted out of the ring of clay that is holding the bottom in place.
In [2] a small amount of powder is added within the circle of clay and new balls of clay are added to the center of the ring and beaten into place each time a new pot is formed.  In both [1] and [2] the bottom edge of the pot is trimmed with the exception that a ring of clay remains with method [2].  In [1] the bottom is always completely removed.


Let me try to bring you up to the point where the video of the 1920’s potter begins.  Because he was repeating forms, he used a style [2] bottom. 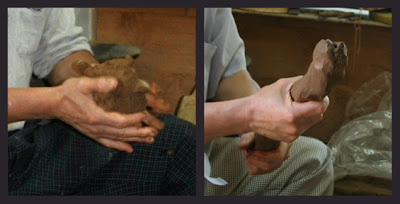 Once the bottom is in place, the potter picks up a piece of clay and forms it into a fat coil. (To illustrate the beginning processes I had to combine three different sets of photos of the same potter so you will see different colors of pants and clay.  The potter in the illustration is Park Byung Teak a cultural treasure in Silla style.  Silla style uses onggi processes.)

It is now time for water to be added.  Reaching into is water container, a wet thick narrow thick cloth was taken from the water jar and placed over the spinning coils and the clay was “thrown” or “turned” into a cylinder from which the pot would be made.  Thirty years ago that cloth was typically a short piece of a dhee or tai kwon do belt.  Today many onggi potters still use this method of adding water.  It appears as though the potter in the 1920's film also used a dhee.  Water is only used on smaller items and the final few inches of large forms in forming onggi.
In the film the dhee  is in the water jar but the wooden tools are on the table.  These tools, made of Asian pine, are normally kept wet, a practice that insures their smooth glide over the pot and also prevents them from cracking should they become too dry.  Notice the jar also serves as a prototype for the form of the pot he is making.
The onggi potter turns the wheel counterclockwise by pulling the flywheel toward him with his left foot.  This allowed his right hands to remain steady as he forms the spinning clay.   Even today the flywheel has very little “carry” and did not spin long without pulling the wheel often.
Now lets watch the film.  In it he is using two tools a flat wooden rib that he uses to shape the entire form and a long mit ga sae or literally bottom knife that he uses to trim and shape the bottom side of the pot.  In the video suddenly the top of the pot appears as though by magic.  Obviously the filmmaker stopped the film for a while or had to load more film into his camera.  That top was added by adding a coil of clay.  As the video progresses, the potter takes a small piece of clay and rolls it between his hands to make a coil.  Then with a wet hand he ‘pulls’ a handle from that coil and attaches it to his pot. Quickly he uses his finger to indent the pot to create space for the hand on one side of the pot.  On the other side of the pot he attached a handle but does not make an indentation.
Enjoy the film:

Before leaving this post, I should say something about Korean handle forming.  Traditionally only onggi potters ‘pull’ handles.  Handles for more classic Korean ceramic styles are made by hand often using stick forming methods.  We teach those methods along with various really interesting and productive methods for forming coils of all sizes as well as many other forming methods in our Korean ceramic workshops.  Contact us if you are interested in organizing a workshop in your area.
Join this blog to be informed when we post on onggi glazing and reveal a great old film on onggi firing.
(If this post is too confusing for you to understand these processes, please let me know.  Sometimes I may be too close to these action processes to explain them clearly in words.)
Click here to go to our beginning post.
We are now on Facebook.  Join my Facebook page and 'Like' us at Morning Crane Tea.
Posted by Cho Hak at 2:54 PM

Cho Hak
I am a Korean American potter and retired professor. I worked principally with Kenneth Beittel, Hamada Shoji, Manji Inouie and worked in Icheon, Korea. I’ve been a potter for many years and fire mostly in gas and wood. Occasionally, I fire anagama with Ken Shenstone. Mary, my wife joins me in this work. For nearly 40 years, I have also been interested in Korean tea, about 10 years ago I decided to try to promote Korean tea and Korean tea ware. That was when Morning Crane Tea was born. Why have I not mentioned the long interest in Korean tea here before. I consider myself to still be a beginner. At the same time, I know many others who consider themselves experts on Korean Tea having studied it a few months or a year or even after one trip to Korea to view their tea fields or a few conversations with several Korean tea people. If they are experts and I am not, why do I find so many errors in their work? In another ten years I may no longer say I am a beginner, but until then this is what you have.